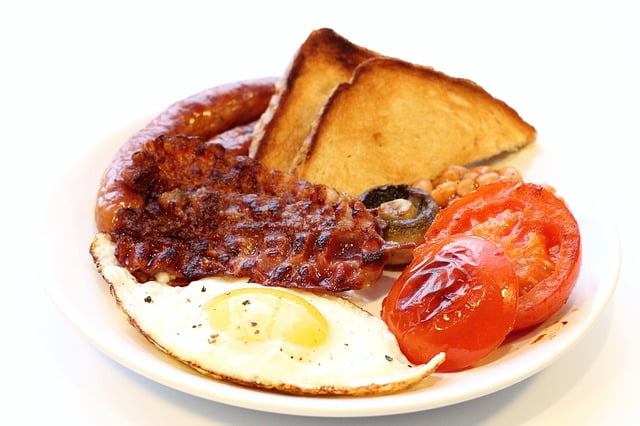 Who doesn’t love Bacon? After all, it is a versatile food that makes your breakfast healthy and can easily fit your lunch and dinner. But, if you are aiming to lose weight, you need to keep a check on your carb intake. If you are wondering – How many carbs in bacon? – this article is the right way to explore!

Bacon is salt-cured pork and sometimes referred to as “meat candy”. It is consists of flavors from pork, salt, natural smoke, or chemicals. Sometimes artificial sweeteners are added as well to enhance its taste.

Preservatives like nitrite or nitrate are also added to improve the shelf life of bacon and its appearance.

Bacon goes through a process of curing –a process where bacon is soaked into a solution of salt, nitrates, and sometimes sugar to preserve the meat and to add up to its taste.

As it is processed meat, it is recommended to limit its intake as it is high in sodium. The amount of the processing and ingredients used in the preparation of bacon varies from manufacturer to manufacturer.

How Many Carbs are in Bacon? Nutritional facts?

Like all other meats, bacon is nutritious as well. 100 grams of cooked bacon has the following nutrients:

High in Fat and Salt

It has a high amount of saturated fat that can clog the veins and can increase the risk of heart diseases. Hence, it is recommended to include a small serving of bacon. Under the Paleo diet, the focus is higher on protein than on dietary fats.

Around 25% to 35% of your total calories should come from fat. For an average 2000 calorie diet, around 44g to 78g of fat is required. If you include bacon in your diet, more than 255 of your dietary fat comes from it. As it contains unhealthy saturated fat, it should not be more than 13 g per day.

As bacon undergoes the curing process where salt is used, it is high in sodium. Higher salt intake leads to high blood pressure. Hence, it is not recommended to include high salt in your diet.

Carbs and Protein and other nutrients in Bacon

Bacon is loaded with fats but low levels of carbs. Hence, it is suitable for keto and other weight loss programs. If you are aiming to lose weight, it is safe to include bacon in your diet in restrictive quantities.

From 10% to 35% of your daily calories should be attributed to protein. Bacon is a rich source of protein but has a high-fat content too. You can choose the other plant-based protein or meat like a good substitute for bacon.

For those who are looking for low–fat and low sodium diet plans, including bacon in their plan won’t be a smart choice.

The nutrition levels also depend on the type of bacon you are consuming. Check the label of nutrition to explore its right nutritional value.

Bacon also contains iron, zinc, and magnesium. It is also a very good source of potassium.

4,700 milligrams of potassium is recommended for adults every day to maintain blood pressure, bone strength, muscle strength, and cardiovascular health.

Apart from these nutrients, bacon also provides enough amounts of vitamins B1, B2, B3, B5, B6, and B12 along with the required amount of selenium and phosphorous which help remove harmful radicals that damage cells and helpful in strengthening teeth, and bones respectively.

Carbs in a bacon

Bacon is generally low in carbs and high in fat. Hence it is acceptable in most weight-loss diets. Most of the ketogenic diet or low-carb diet includes bacon. However, if someone is looking for a low-sodium and low-fat diet, bacon should be avoided.

Carbs form 45-65% of daily calorie intake and vary in context to factors like age, sex, lifestyle, etc. For an average 2000 calorie diet, generally, 225 to 325 carbs are recommended per day.

Hence depending on the type of bacon you choose, the carb content in them varies. There are few varieties of bacon that are sweetened using brown sugar or maple syrup to enhance its flavors. Hence, the carb value in such type of bacon is higher.

Also, this low-carb food has no dietary fiber. Hence, this indigestible carbohydrate slows down the absorption of sugar and fat in the bloodstream.

Since bacon is meat cut out from a pig, so the taste of bacon can depend upon the breed of pig and the way bacon has been cut out as well as the method through which it is processed. Here are some different types of Bacon:

Seitan is made from wheat gluten, a protein of wheat. It is a meat alternative that has a chewy texture with a mild flavor.

It is tasty as pork bacon which is created from the belly of the sheep. Enjoy more depth of flavors with this bacon.

You should try the buffalo bacon if you don’t want to eat pig bacon. It is nutritious and delicious. There are some brands that offer low sodium Buffalo pork.

Compared to traditional pork cuts, turkey bacon is relatively lower in fat. It is alternative bacon made from turkey. However, there are some brands that include higher sodium levels. Hence, read the label carefully before you buy it.

Coconut bacon looks familiar to finely chopped bacon which is usually complemented with baked potatoes and salad as toppings. Made with unsweetened coconut flakes, there are tons of recipes on coconut bacon.

It is made from the breast of the duck. Many people find smoked duck bacon more delightful than pig bacon.

Made from fermented soybeans, Tempeh bacon is a good option if you want to try a new flavor.

Bacon has a high level of fats with a high proportion of oleic acid. Oleic acid is a kind of fatty acid and is considered to be healthy for the heart.

What is the way of Cooking Bacon?

Skillet, Microwave, and oven are the three basic methods for cooking bacon.

Does crispy bacon cause cancer?

Recent studies do not support the theory of crispy bacon causing cancer. It is a long-held belief, way back to the 1970s that heterocyclic amines (HCAs) and polycyclic aromatic hydrocarbons (PAHs) are produced when the meat is charred.

Acrylamides are another cancer-causing chemical that is produced when certain foods are charred/roasted heavily. However, in most cancer cases, acrylamide is not linked, as per the study in 2015.

You can easily store properly refrigerated and sealed bacon for a month. Though frozen bacon can be stored in the freezer for about 6 months, provided it should be sealed. Any unsealed bacon should be consumed within 7 days or less.

If bacon smells bad or sour, discard it right away. The spoiled smell of bacon arises due to the presence of bacteria which may lead to food poising as well.

Once the bacon crosses its ‘use-by date, you should not use it.

3 thoughts on “How Many Carbs in Bacon? Improve Your Health 2022 [Updated]”